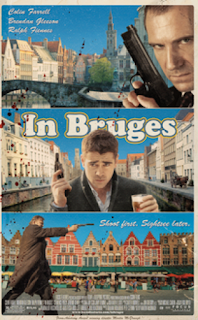 "I'm sorry for calling you an inanimate object.  I was upset." -Harry Waters After a job goes drastically wrong, two hitmen, Ray (Colin Farrell) and Ken (Brendan Gleeson), flee England to hide out in Bruges, Belgium.  While waiting for orders from their boss, Harry (Ralph Fiennes), on how to proceed, they spend most of their time sightseeing. If you haven't seen In Bruges , please don't read any further.  It's a great movie with a lot of fun and dark twists and turns.  So go watch it for yourself and then come back and read this review.   Spoilers ahead.  You have been warned.  What Works: The performances really carry this movie, especially Colin Farrell.  He's a young and inexperienced hitman and has no interest in sightseeing in Bruges.  He reminds me a lot of that kid we all had in our class in elementary school.  The one who can't shut up or sit still.  Ray is like that this entire movie, but now he's hit the stage where even he knows he has
Post a Comment
Read more 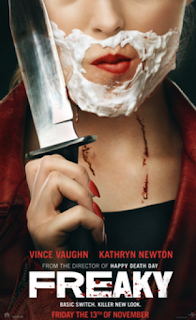 "I want my body back!" -Millie Kessler Unpopular high school student Millie (Kathryn Newton) is attacked and nearly killed by the Blissfield Butcher (Vince Vaughn).  The next day, she discovers she has switched bodies with the Butcher.  With only a few hours left to switch back, Millie has to convince her friends to help her and stop the Butcher from using her body to continue his murderous rampage. What Works: Vince Vaughn is far and away the best part of the movie.  He starts off the movie by showing us how intimidating a killer he is, but he's also hilariously good at playing a teenager girl once the body switch happens.  It's really funny and frequently creepy.  It's get uncomfortable and weird often, but it's never not entertaining and it feels like he was having a blast in the role. As I mentioned, the beginning of the movie does a great job at setting up the Butcher.  It's better than anything in any of the Friday the 13th movies.  We're introd
Post a Comment
Read more 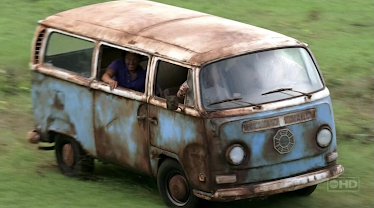 "Those pants don't make you look fat." -Jin Kwon "Tricia Tanaka is Dead" starts off with a flashback to when Hurley (Jorge Garcia) was a kid, where he and his dad, David (Cheech Marin), are fixing a Camaro together.  Unfortunately, David takes off and leaves the family.  17 years later, after winning the lottery, Hurley buys Mr. Cluck's Chicken Shack.  He does a interview with Tricia Tanaka (Sung Hi Lee) before the grand opening, but a meteorite destroys the Shack and kills Tricia and her cameraman. Hurley returns home to find David has returned.  Hurley believes David just showed up for the money, but his mother, Carmen (Lillian Hurst), reveals she called him because of Hurley's insistence that there is a curse on the money and his plan to go to Australia.  David tries to remove the curse by taking him to a fortune teller, but Hurley gets her to admit that David set the whole thing up.  As Hurley prepares to leave for Australia, David admits he showed
Post a Comment
Read more 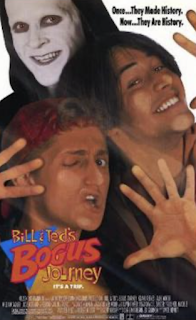 "You have sunk my battleship." -Death Stop right here.  If you haven't seen Bill & Ted's Bogus Journey , fix that mistake right now before reading any further.  You've been warned. An evil terrorist from the future, De Nomolos (Joss Ackland), sends a pair of evil robots back and time to kill Bill (Alex Winter) and Ted (Keanu Reeves), which they accomplish quickly.  Now Bill and Ted have to find a way to cheat Death, stop the robots, save the princesses, and win the Battle of the Bands. What Works: Watching Bogus Journey for the first time is one of my absolute favorite cinematic experiences.  I didn't really know anything about this movie going in and I'm glad that was the case.  It keeps escalating in weirdness to extraordinary levels.  Just when you think it can't get any more bizarre, it does.  My jaw was dropped for nearly the entire film.  It's a joy to watch and a ton of fun. Bill and Ted are such likable characters that I could watch th
Post a Comment
Read more 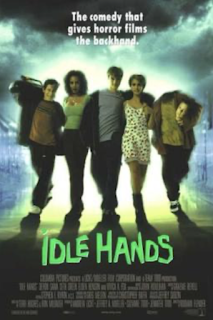 "I'm gonna go call 911.  What's the number?" -Mick Anton Tobias (Devon Sawa) is such a lazy stoner that he doesn't even notices his parents have been murdered.  When he does finally figure out, he realizes his hand was the culprit.  With his hand possessed and going rogue, Anton is faced with cutting off his own hand, but even if he does, can he stop it from killing even more people? What Works: This a very weird movie.  It's a stoner comedy, but also a horror movie.  The end result is a stoner/horror/black comedy and I'm here for it.  I love horror movies and I love black comedies.  Plus stoner comedies are a guilty pleasure of mine.  Somehow this movie functions on all three levels and makes for a unique and fun experience. Devon Sawa absolutely kills his performance on a physical level.  He plays himself and his possessed hand.  It's an extremely impressive performance and I have no idea how someone can be coordinated enough to pull off what he is
Post a Comment
Read more 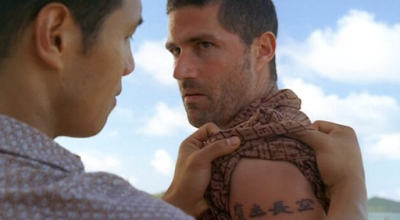 "You have a sheriff?" -Jack Shephard Season 3, episode 9 kicks off with Sawyer (Josh Holloway), Kate (Evangeline Lilly), and Karl (Blake Bashoff) paddling back to the island, even though Kate wants to go back to help Jack (Matthew Fox).  When Karl breaks down crying, Sawyer tells him to go and fight for his girlfriend, Alex (Tania Raymonde), and lets him go.  Sawyer tells Kate he knows she only slept with him because she thought he was going to die and they head back for camp. On Hydra Island, Jack is moved out to the cages, while Juliet (Elizabeth Mitchell) is put in his old cell because of her killing Danny Pickett (Michael Bowen).  Juliet is allowed out to treat Ben (Michael Emerson), who develops an infection.  She asks Jack for help, but he refuses.  Later, the stewardess from Oceanic 815, Cindy (Kimberly Joseph), arrives, but only tells Jack she is here to watch something and seems to be a member of the Others. Jack is brought in for questioning by the Others' sher
Post a Comment
Read more

The Return of the Living Dead 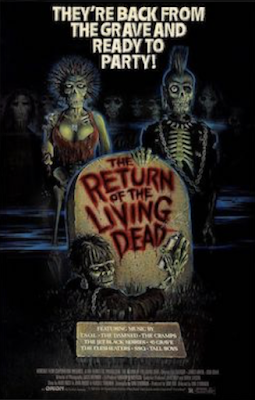 "Brains!" -Zombies A pair of medical supply warehouse workers accidentally release toxic gas that brings the dead back to life  with an appetite for brains.  The workers are forced to team up with a group of punks and hold up in a mortuary as the nearly indestructible zombies try to break their way inside. What Works: The thing I like most about this movie i s how competent the three main characters are.  Burt (Clu Gulager), Ernie (Don Calfa), and Spider (Miguel A.  Núñez) are all very good at surviving.   Competent  characters are one of the most  important  elements for me for horror movies and to have three guys who make virtually no mistakes makes it easy for me to get invested in the characters and root for their  survival . James Karen and Thom Matthews play the two men who unleash the toxic gas that kicks off the  movie.  They actually get poisoned by the gas, which prevents them from doing much in the film, besides lying around.  It turns out they are actually dying
Post a Comment
Read more
More posts

Ryan Stacy
I'm a guy who has too much time on his hands. I like to talk about movies and TV shows waaaayyyy too much and share my useless and uninformed opinions. Follow me on Twitter @StacysBlog23 and check out my podcast: How to Survive a Horror Movie at http://surviveahorrormovie.buzzsprout.com